Customize with Apps and Bots to help you on the hard work.

This Documentation includes guides, tutorials and references for you to build your own solutions in the shape of Apps and/or Bots to customize and extent your business workflows on Bkper.

Bots are triggered by events in your books giving you the power to greatly reduce the labour of repetive low value and fault sensitive tasks whereas Apps empower collaboration from simple enhancements to sophisticated business understanding.

Under constant evolution, you can keep up with new releases and deprecations on our changelog and check for the platform status at anytime.

Apps can be as simple as opening a url in the book’s context or as complex as a complete Add-on with business logics.

They are interactive solutions that can run independently and integrate to third party solutions.

All Bkper Apps are listed on the Automations Portal accessed at app.bkper.com > Automations > Apps menu.

Each App has its own page, logo, site and additional details, like bellow:

The App listing and settings are managed using the Bkper bkper-node utility.

Apps can add context menus items on the Transactions page More menu in your Books. This allows for you, to open dynamically build urls with reference to expressions of a Book’s context.

Once you install an App with a menu configurations, a new menu item will appear in your Book:

The popup that opens carries the particular context of that book at that moment: 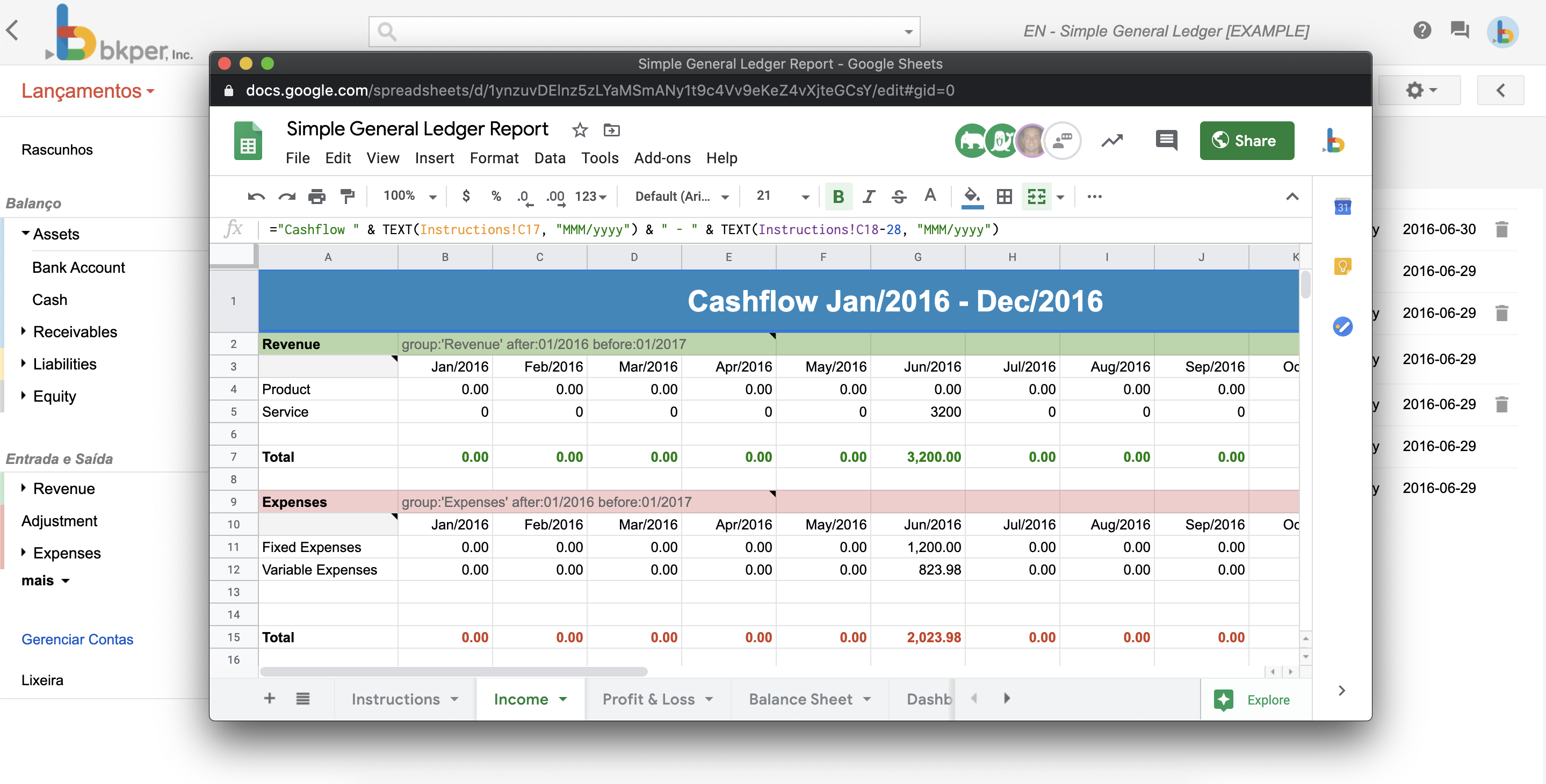 On selecting the new option from the more menu the url can be composed dynamically, by replacing expressions ${xxxx} with contextual information of the Book. Example:

Once user click the More menu button, the menu url will become:

For reference of the accepted expressions see bkperapp.json.

Each App can define an Agent for acting on behalf of the user, and its activities and transactions are identified by its logo and name on Bkper:

The App agent is identified by the API Key when calling the API.

Apps are created and updated by the rest API, using the bkper-node utility and library package.

Bots are a specialized kind of App that react to events from your Books.

Bots run on behalf of the user who installed it, and the agents are identified in the transactions and activities list:

The bot responses are registered in the activity which started the bot call and can be viewed and replayed by clicking on the response at the bottom of the activity:

A Bkper Bot is authenticated via OAuth2, requiring a standard Cloud Platform project

Apps Script Bots has lower level of development complexity and the execution environment is subjected to constrained Apps Script Quotas. The quota counts against the end user who installed the bot.

Its recommended for scenarios where the Bot event handling thoughput is under 1 event/second/user and the logic can be handled syncronously.

Good cases are customized import/export bots, such as the Bkper CSV App

Once the bot is developed, it should be released to users in a stable version, and make sure this version does not break when working on the code after the bot is already running for users.

To do so, Google Apps Script platform provides a mechanism called Deployments.

Bot installations use the Deployment ID especified in the bkperapp.json.

You can find the Deployment ID in the Apps Script console:

Copy and paste the ID into deploymentId property in the bkperapp.json to specify which Deployment to use.

A same Deployment can run different versions of the script, so:

A Bkper Bot running on Google Cloud Functions infrastructure, makes authenticated calls to the deployed function, as the bkper-hrd@appspot.gserviceaccount.com service account. In order to authenticate the service, you need to give the service account bkper-hrd@appspot.gserviceaccount.com the Cloud Functions Invoker IAM role (roles/cloudfunctions.invoker)

For the end user, in the webhookUrl production endpoint, we send the OAuth Access Token of the user who installed the bot, and the Bot API Key, in the bkper-oauth-token and bkper-api-key http headers, respectivelly, on each event, so the Bot can use both tokens to call the API back on behalf of the user. The webhookUrlDev development endpoint does NOT receive those tokens, so the developer needs to perform the login locally and send the access_token accordingly. This can be simplified by the bkper-node utility library.

The function response payload must be in the format:

The result object is recorded on each book activity that generated thee event as the bot response.

If the function returns a {result: false}, the bot response is suppresed and not recorded at the activity.

Any error returned, like {error: "This is an error"}, will show up as a Bot Response error, explained in the Development session.

To show up the full error stack trace, you can do like bellow:

That way the stacktrace will be pritty printed in the Bot Response.

The events throughput to the bot can sometimes be high, specially when processing large batches. You should set the max instance limit - usually 1-2 is enough - and the function will return a response code of 429 Too Many Requests, then the bot call will be automatically retried, with an incremental backoff logic, until receives an http 200.

Cloud Function Bots has a higher level of development complexity and the execution environment is subjected to Cloud Function Quotas. The quota counts agains the developer account, not the end user.

Its recommended for scenarios where the Bot event handling thoughput is even higher than 1 event/second/user and the logic can be handled asyncronously.

The Cloud Function Bots can be composed of context menus, built with Apps Script HTML Service, or any other infrastructure, to provide additional user interaction features.

Cloud Function Bots are actually a recommended and proven way of handling book events in a high scallable and secure infrastructure, although you can build and host your bot in any other cloud infrastrucure, as well as on-premise.

To do so, you can use the same webhookUrl property and the development endpoint at the webhookUrlDev, in the bkperapp.json file.

The calls to the production webhook url is signed with a JWT token using Service to Function method. You can use this token to assert the identity of the Bkper service to ensure hight level of security. This is automatically done by the Cloud Functions infrastructure, so, we strongly recommend it.

The events throughput to the bot can sometimes be high, specially when processing large batches. If the bot infrastructure gets overloaded, you can return an http status 429 and the bot call will be automatically retried, with an incremental backoff logic, until receives an http 200.

The Bot runs in Development Mode when executed by the developer or owner of the App.

Any succesfull result or error will be shown as the Bot response:

You can click the bot response to replay failed executions.

If you return an html snippet, with a link for example, it will be rendered in the response popup.

If you want to avoid recording the reponse, simply return false from your trigger function.

The functions are bound to events by it names in camel-case, starting with “on”. Example:

For the TRANSACTION_POSTED event, the function called will be onTransactionPosted(event).

All bot triggers function, such as onTransactionChecked(event), receive an Event object in the following format:

The Event payload is the same exposed in the REST API and, if your are using Typescript, you can add the bkper-api-types package to your project and set the bkper.Event type on your trigger functions, like bellow:

The bkper-node package helps you create and manage Apps and Bots configurations as well as provide a simple interface for accessing the Bkper REST API.

The bkper-node offers a complete programming interface to help streamline the development workflow.

You can add a .env file at the root of your project with those variables and bkper will automatically load from it.

The bkperapp.json file stays in the root of the App project and contains the App configuration information.

The Bkper REST API is the interface for Apps and Bots to interact with the Bkper Books having users sercurely authenticated under OAuth2 protocol.

Note: The REST API is the underlying connection interface behind the BkperApp library.

The API is built on Swagger OpenAPI and Google API Discovery specifications:

You can use these specification documents to generate client libraries using open source tools such as OpenAPI generator or Google APIs code generator, in the language of your choice.

To call the API directly from the browser, you can use the discovery document with the gapi.

If you are using Typescript, we keep an updated type definitions package on npm you can easily add to your projects for autocomplete and contextual documentation:

We provide a REST API Developer portal at api.bkper.com so you can check out the endpoints paths and payload formats, and try the API live:

To see the API in the portal, you must join bkper@googlegroups.com.

Once you join the group, you can access api.bkper.com and the API app.bkper.com will be available for you.

NOTE: Do not store the API Key on your code to avoid leaks, potentialy leading to quota theft. See securing an API key best practices.

For Google Apps Script, you can use the Script Properties. To store it, open the online editor, File > Project properties > Script properties.

You should send a valid OAuth2 Bearer token in the Authentication header of the API http requests.

For Google Apps Script you can use the built in ScriptApp.getOAuthToken() in your code to access the OAuth2 access token the script has acquired and pass it in the Authorization header of a UrlFetchApp.fetch() call, like bellow:

The ScriptApp.getOAuthToken() should work on most cases, but, if you work on some restricted environment, such as Google Sheets custom functions, you can manage the tokens with the OAuth2 for Apps Script library. See the bkper-sheets Authorizer for a detailed example.

For client side javascript, you should configure the OAuth consent screen and use the google-api-javascript-client initializing with our discovery document, your API key, Client ID and the email scope, like bellow:

NOTE: Don’t forguet to restrict your key only to http referers your project will run

Once you enable and start using the API, you can check out detailed metrics on the GCP Console, of the API calls for your project:

The metrics dashboard provides you with information about endpoint calls, latency and errors, giving a good overview of the project integration health.

The quotas dashboard provides details of the current default and quota exceeded errors.

The current default quota 180 requests per minute, per project. If you need to increase the quota, please get in touch so we discuss your case.

Tax Bot - Bot to calculate VAT, GST and taxes based on the transaction amount.

Altough you can work on the Online editor really quickly, we strongly recommend clasp to develop locally with Typescript on VS Code editor, which is really powerfull and free, so you get:

Those are some libraries we use to build our own Apps and Bots. It’s a set of well tested and documented libraries you can use on your own projects:

By default, the App or Bot you create is visible only for you or your company, in case of Google Workspace domains.

If you are interested in publishing your App or Bot to all users, please contact us at support@bkper.com